A Princess of Mars, Part 3 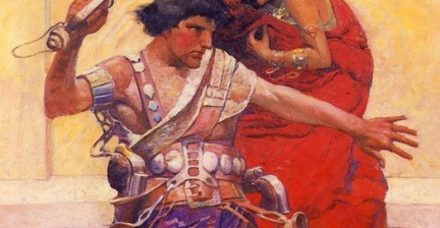 JOHN CARTER:  Another of the large air ships exploded high in the air. Members of the crew fell to the ground.  The huge ship lost control and began turning again and again.

Soon it was close to the ground.  The warriors climbed aboard the ship and began fighting the members of the crew who were still alive.  Soon the fighting stopped.  The warriors began taking everything from the ship.

At last, they brought a captive from deep within the ship.  Two of the warriors had their captive by each arm.  I wanted to see what new and strange form of life this creature would be.

As they came near, I saw that it was a woman.  She looked like a woman from Earth.  She was young.  Her skin was a light red, almost a copper color.

I saw at once that she was extremely beautiful.  She had a fine face with large dark eyes and long, black hair.  As her guards led her away, she saw me for a moment.  She seemed very surprised.  Her face looked hopeful.  But when I made no attempt to speak to her, her face grew sad and she looked very small and frightened.  As I watched her disappear into a building, I realized that Sola was near me.

SOLA: John Carter, that woman will be saved for the great games that are held by our people.  The games are long and cruel and end in death for those captured in battle.  Her death will be slow and painful.  She will die for the enjoyment of all.

JOHN CARTER: Sola’s face seemed sad when she said this.  I could tell by the way she spoke that she did not like the games and did not want to see the young woman die.  She was very different from the rest of her people.

SOLA: No, John Carter.  My mother died in the games.  That is a secret you must not tell anyone.  The wall where Tars Tarkas found you held eggs that produce our young.  All the children belong to the tribe.  A mother never knows which child is hers when they come out of the egg.

My mother hid the egg that carried me.  It was not placed within the walled area.  She kept her secret until after I was born.  But others discovered her secret and she was condemned to die in the games.  She hid me among other children before she was captured.  If this secret were learned, I too would die in the games.

Before she left me, my mother told me the name of my father.  I alone keep that secret.  It would mean death for him as well as me.  My people are violent and cruel.

JOHN CARTER:  The next day I entered the great room where the green Martians held meetings.  The red woman prisoner was there too. Soon, the leader of the green Martians came into the room.  His name was Lorquas Ptomel.  He began speaking to the prisoner.

LORQUAS PTOMEL:  Who are you and what is your name?

DEJAH THORIS: I am the Princess Dejah Thoris, daughter of Mors Kajak, the ruler of Helium.  Our air ship was on a scientific flight.  We were to study the air and atmosphere.  Without our work the air on our planet would grow thin and we would all die.  Why would you attack us?

JOHN CARTER: As she talked, a warrior ran to her and hit her in the face, knocking her to the ground.  He placed a foot on her small body and began laughing.

I reached for the small sword I carried and rushed to attack the huge warrior.

JOHN CARTER: He was a strong opponent.  But again, because of the low gravity on Mars, my strength was far greater than his.  In a few short minutes, the green warrior was dead.  I helped the young woman to her feet.

DEJAH THORIS: Who are you?  Why did you risk your life to help me?  You look almost the same as my people, but you wear the weapons of a green warrior.  Who… or what.. are you?

JOHN CARTER: My name is John Carter. I am from the planet Earth.  How I got here is a long story.  I attacked that warrior because, where I come from, men do not attack women.  I will offer you my protection as long as I can.  However, I must tell you that I, too, am a captive.

SOLA: Come, John Carter, and bring the red woman with you.  Let us leave this room quickly before some warrior attempts to stops us.

JOHN CARTER: The three of us quickly returned to the building where I had spent the last several days.  Sola then left to prepare food.  Woola sat in the corner and looked at the both of us.  The young woman was afraid of poor, ugly Woola.

I told her not to fear him.  You must tell no one, but Woola is not only my guard.  He is my friend.  I have treated him with kindness that he has never known.  As each day passes, he trusts me more.  I now think he would follow any command I give.

Sola has told me that all captives are held until they can die in the great games held by the green Martians. Our only chance to survive is to escape.  But we must have Sola’s help for our plan to succeed.

DEJAH THORIS: Yes. If we stay with the green warriors, we will both die.  If we are to escape, we will need several of the animals to ride.  It would be our only chance.

JOHN CARTER: I have several of the animals.  They were given to me when I became a warrior.

Sola came back later with food for the two of us.  Dejah Thoris and I asked for her help.  The three of us talked long into the night.  At last Sola gave us her answer.

SOLA: Your best chance for escape will be in the next two days.  We will leave this city tomorrow and begin a long trip to the home of our tribe.  I will help you escape.  But I must come with you.  I will be killed if you escape.

DEJAH THORIS: Sola, of course you must come with us!  You are not cruel or violent as many of your people are.  Help us and I can promise you a much better life.  You will be treated with respect as an honored guest.

JOHN CARTER: The next morning we rode away from the city on our animals.  More than a thousand animals were carrying the huge tribe of green Martians.  Also in the group were one American, one Princess of the Royal House of Helium, our guard, Sola, and poor ugly Woola.

Late that night we left the camp.  One animal carried me.  Another Sola and Princess Dejah Thoris.  Woola followed close behind.

We rode quickly through the Martian night.  I looked into the sky and saw Earth across the great distance of space.  Since I had met the Princess Dejah Thoris, I had not thought once of Earth or home.  I knew then that I would never willingly leave her.

The next morning, I could see that we were being followed by several hundred of the green warriors.  Our animals were very tired.  I knew we must stop.

I told Sola and the Princess to take the stronger of the two animals and ride away.  I will hold back the green warriors as long as I can.  Woola!  Go with them and guard them with your life.

DEJAH THORIS: We can’t leave you alone. It would be certain death if you are captured again.  You must come with us!

JOHN CARTER: Sola took the princess by the arm and lifted her on top of the animal she had chosen.  Quickly she began riding away.  For a moment, Woola looked at me, then turned and ran after them.

I took out my rifle from its case.  I began firing to slow the green warriors.

I was able to slow them for more than an hour.  But then I had no more ammunition.  Soon I was surrounded.  A green warrior got off his animal and came toward me.  He pulled out his long, thin sword.  I reached for mine.  As we neared each other I saw it was Tars Tarkas.  He stopped and spoke to me very slowly.

TARS TARKAS: You will die here… today… John Carter.  It is I who must kill you.  Know that I will take no pleasure in your death.